Shortly after our RV showed up we made a trek to VA to get some things. Our eyes were bigger than our coach. We had rented a truck and came back with so much stuff that boxes were literally stacked floor to ceiling all over with a mere path to the fridge and front door.

You find out you can live without a lot of things once you make the choice to life full time in an RV.

For instance … books. Heavy space sucking books. I love books too. The way they feel, smell – the turn of a crisp page. Yeah I’m crazy like that. But 10 boxes of books wasn’t at all practical to keep. So I sold most of them to a used media store. Same went for CDs and DVDs. We paired down a lot of stuff in a short time.

I was so proud of LK – after years of collecting parts and bits of technology – tools and pieces of projects that he might “need again someday” – he left 99.9% behind.

Living in an RV full time has done a lot for my shopping habits as well. I still tend to pick up items I think I want / need and carry them around the store. As I shop I think about the use of the item, how much space will it take up, can it be multitasked. 9 out of 10 times it gets put back. Clutter can not be part of your life when you live in 400 sq ft of space.

It’s been a year of RVing full time and I love it. I love it even more now that we have a truck and we CAN actually go somewhere. But it really is a comfortable home.

After a few weeks of unpacking, donating, selling and giving away things we made a dent and the boxes were gone. Some things were gone that we weren’t willing to part with.

Our generator was stolen – while we were home, asleep. It was attached to the RV by a very large cable. Unfortunately, this coach is insulated so well not even the dogs heard the theives working to cut the cable. It was gnarled pretty bad so we know it took them some time to cut it.

Living in that trailer park was awful. About the time LK figured out the job there wasn’t what they sold him on the SWAT team showed up to the trailer park to stop a man with a shotgun from killing himself. Not just the SWAT team – but pretty much the entire Lexington police force along with the MAYOR – talk about small town tactics. It was time to leave.

Before Spring sprung LK had interviewed in Raleigh, NC for his current job and we were making plans to escape Lexington before anything else happened to us.

We hired someone to tow the coach to our new “lot” in NC. We secured anything that would fall over, rattle and pulled in the slides and away we went. Woke up in our own bed – drove to our new place – slept in our own bed. Easiest move we’ve ever had. 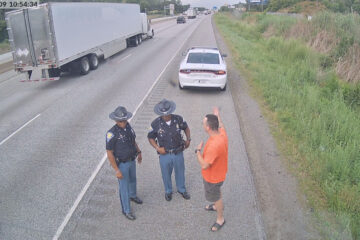 My Seat On Location RV There Yet? Seriously?

Here we are… again.. with no engine cooling… Stuck in Gary Indiana. I (Michael) am not a mechanic by trade. I’m very capable at doing about anything I set my mind to, but there’s certain Read more…