That is really nice. I saw it before I even enlarged the photo. Thanks for sharing!

Nice to see your astro posts. I thought I would finally comment here. I am VERY envious of your nomadic lifestyle now. If you ever hit it big, get an Airstream and pull it by a vehicle that gets ridiculous gas mileage. Also, to counteract the fossil fuel guzzler, put a Tesla at the end of the Airstream.

I have bought a Lunt scope myself now too.

Hi all, A few weeks back, David Bott (from OutsideOurBubble.com) and Michael did a bit of a technology test live-stream which turned into a Q&A and launched a new web-site!  TurtleBubbles.com  — more of a Read more… 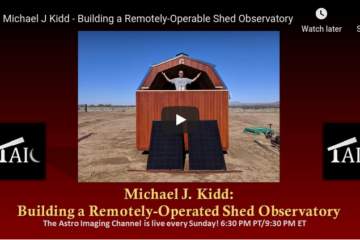 I (Michael) was recently featured in a YouTube live stream to talk about building our remote operable observatory. If you can’t get enough of that type of thing, check out the stream below. Note: There Read more…