After our big electrical system upgrade ( MOD: TESLA Powered Tiffin! ), everything was working very well. Until…

Until, the outside temperature got up in the high 90’s while we were in far northern California. The first sign of trouble occurred on a Friday when I’d driven off to do some astro-shopping at a local star-party. Unfortunately, because of the rural nature of Tionesta, CA, I had no cellular signal and no notice of a problem until I got to the star-party. There, I was sharing internet with all the other star-party goers, so saying it was strained and slow would be an understatement. To make matters worse, the star-party location was a full hours drive away from the coach.

Once I got to the star-party, I got notices that all power was out in the coach. A vendor at the star-party let me use his Verizon phone (which some how had signal) to call my lovely wife. Unfortunately, I couldn’t get things figured out over the phone, so I raced back to the Coach in effort to return power and Air Conditioning as soon as possible.

It took a few days of troubleshooting and figuring to identify the ultimate cause. LRA. Oh, you’re not familiar with that acronym? I wasn’t either. It stands for ‘Locked Rotor Amperage’ and is a measure of how much current is required to start the Air Conditioning Compressor from a stopped ( locked ) state. It turns out, the 13.5k BTU Coleman Mach 8 Heat Pumps in our coach have an LRA rating of 63 amps! This value is specifically measured at 95 F outside temperature. When the temperature is cooler outside, the LRA is lower and likewise, if the outside temperature is hotter, the LRA is also higher.

In more research on this, I found that the brief high current inrush during compressor startup is short enough that a typical 50 amp RV breaker doesn’t react. Even the 20 amp breaker inside the coach for the Air Conditioner isn’t tripped by this massive current inrush, again, because it’s simply so short in duration. However, it turns out the Magnum inverters are MUCH more sensitive to this type of current rush. And with my new electrical wiring, all shore power flows through my 2 x 4000 Watt inverters. While the outside temperature had been cooler up until this specific Friday, we hadn’t hit an issue. But the temperature climbed and suddenly, we were getting daily trips on ‘over-current’ from the inverters.

Luckily, MicroAir EasyStart 364 ships VERY quickly! By the end of the next week, I had 3 of them in my (often hot) little hands! Installation on the Heat Pump version of the Mach 8 was easy and MicroAir had a wiring diagram to help out. It wasn’t 100% clear however, so here’s the step by step for my non-plus Mach 8. 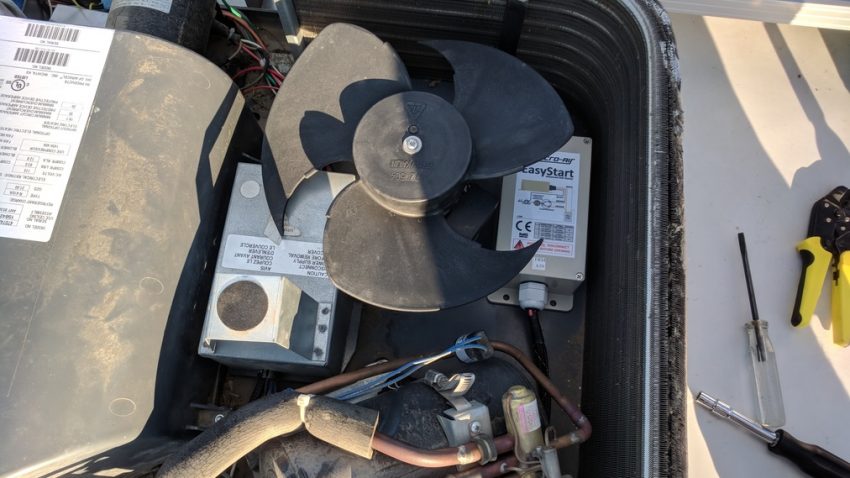 Now, I don’t have to worry about my Inverters tripping on Over Current during my AC start-ups!