An extra screw and a broken belt

While relocating my astronomy observatory, I routinely had extra bits in pockets. I tried to be diligent and ensure the pockets were always empty when I put clothes in the laundry area, but… alas, I missed something.

The first expression of this lapse came from a phone call. I was working on the observatory, and Lehnanne called. She explained that the dryer was making a very loud metal on metal scratching sound, then it stopped spinning even though the motor was clearly still running.

Turns out, I had missed a screw in the pocket of my work pants from the previous day. The screw had fallen out of my pocket in the dryer and lodged itself between the part of the drum that rotates, and the front or rear wall, which does not rotate. This applied significant resistance to the drum rotation, which lead to the motor burning through the dryer belt -very quickly-.

This presented a few challenges:

I managed to drill access holes through the walls so that I could unscrew the dryer from the bracket which anchored it to the washer.

Then, I used the access panel to get to the power plug and dryer hose connections. Thinking I was home free, I started trying to extract the dryer, only to realize the hinges of the doors to the laundry area were in the way – so, I had to take the doors off. Finally, the dryer was free for me to bear hug and pull out into our bathroom.

A few more screws and I was in! And, sure enough… the belt was no longer visible on top of the dryer drum.

I found the right dryer belt on Amazon (of course), but it took over a week to arrive ( not quite the same as the next day delivery option I’m seeing right now while we’re here in Las Vegas). So, I put the dryer back together… and sat it back on top of the washing machine in the closet. Why? We live in an RV! 🙂 There’s no easy way to have it just sitting around, so back where it was meant to be was the easiest way to keep it out of the way.

Once the new belt arrived, installation was not quite so easy as I’d expected. The new dryer belt -barely- would fit around the drum! Let alone reach down to where the motor pulley (ball park 6″ away from the drum) where it needed to be. Turns out, new belts are designed to be stretched into place. With the right tool, that would be relatively easy.

Without that right tool, I ended up using a very long, heavy duty screw driver as a lever, but first I had to pre-stretch the belt manually – belt under foot, pull hard against it, shift position of the belt, repeat. This gave me enough slack to not only get it over the drum, but about 2″ of droop in the belt itself so I could get my screw driver between it and the drum and lever it down to the pulley.

The next struggle was that with so much tension, and so little remaining structural rigidity of the dryer ( since the top and sides were all off ), the drum was very tough to keep seated against the front of the dryer, where it’s felt seal and dryer door were. It took a good hour start to finish to get what looked so simple, completed.

Initial spin and use of the dryer was a bit more labored than it had been before, but after about 30 minutes of use, the drum had better seated and/or worn in the felt its new location, and the sound returned to completely normal levels. The dryer has now been operating in its usual capacity for almost 3 months without any issue. Woohoo!

Good article Michael and food for though… Message to Mary, Completely check all of our pocket before washing or drying any of our clothes, also pre check the units before use to make sure there’s nothing inside of them. That was a good amount of work to get that belt on… Kudos to you…

Hey, thanks Herbie. It indeed took a surprising amount of effort. 😀 Perseverance paid off, though. 🙂 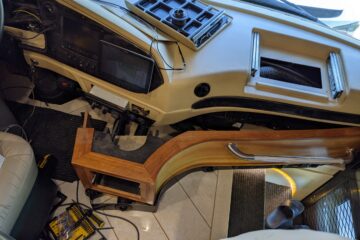 Another little issue that popped up during our drive back from Byron, NY to Las Vegas, NV — our dash AC stopped working! Which, was unfortunate, since it died as we were dropping down through Read more… 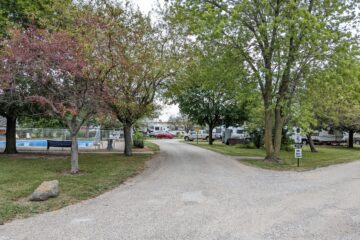