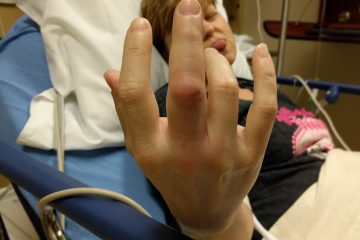 Flexor tenosynovitis – a name only a hand surgeon could love

We have made it to the DFW area.. but not without one BIG – small incident.

On Saturday, as we were driving through El Paso, TX… Dexter (our 9yo Corgi boy) became distressed.  We believe he got one of his nails hung in something, but we’re not quite sure.  He was yelping in pain, so.. like any caring person would do, Lehnanne reached in to help free him from his bindings.  Unfortunately, Dexter didn’t realize it was her, and associated her touch with the trigger of his pain, and Lehnanne got bit.  Dexter is a good boy… as soon as he recognized it was his mom that he had, he released and allowed her to free him of his painful predicament.

The damage, however… was done. END_OF_DOCUMENT_TOKEN_TO_BE_REPLACED

We arrived safely after a very long day. The smell of skunky weed and the drunken off key rendition of “Stand By Your Man” fill the air. If I hear banjos or any squealing we are out of here.

Repeat after me. This is not 7-11, we are not OPEN ALL NIGHT. This is not a fun park, this is not KOA .. this is a quiet mom and pop campground where people come to relax. On site park managers live here but we don’t LIVE here. If you Read more…